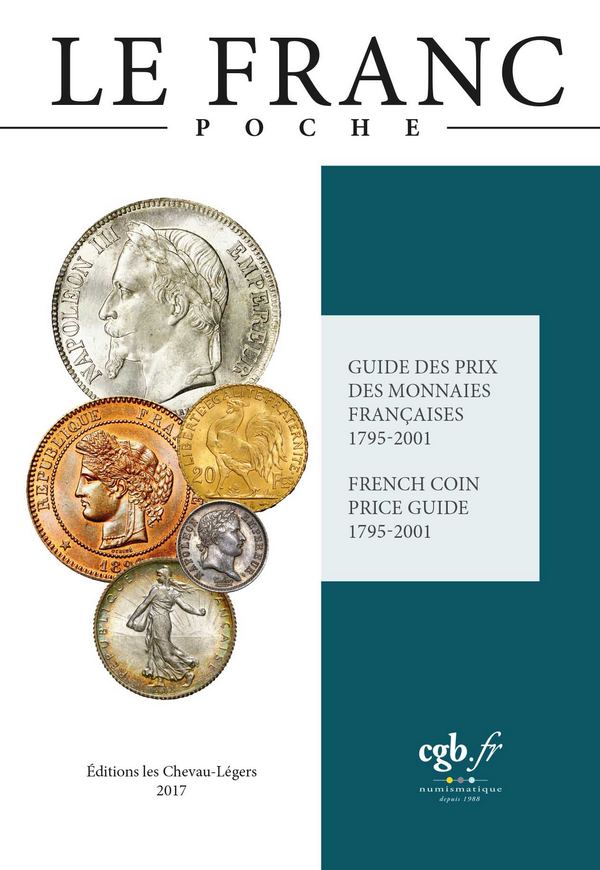 In 2016, Le Franc, guide book of French coins is celebrating its 20th anniversary. It is currently a key reference work for all professionals and collectors of French modern coins. As the title indicates, it is dedicated to French coins from the Revolution to the end of the Franc (1795-2001). Le Franc is a comprehensive publication which has a typology and quotes guide as well as a research, analysis and study manual.
This work is the fruit of 20 years of research, study and indexing by the CGB’s numismatists. Every monetary types is listed for six grades. Explanations and photos accompany each type.
As a true gateway to the world of French numismatics – so rich and diverse, it will help you to grade and quote your French coins as close as possible to the market rate.
For its 20th anniversary, we are offering a new updated paperback version which is handy and accessible to a broader audience called: the Franc Poche.
Today, this public is international. Numismatics is now open to the entire world. The Internet revolution and the emergence of social networks has dramatically changed the situation. Hence this new edition is bilingual, in French and English. The French numismatic heritage is immense and much sought after .

This book represents a serious attempt to apply American grading standards to French coins, and assign realistic corresponding market values. It is no secret that a great number of French coins are of greater rarity in mint state than similar coins of other countries. LE FRANC endeavors to provide market prices for French coins in choice mint state that were simply unavailable (when available at all) at the unrealistic levels listed in previous publication. It is hoped that the high prices listed for French coins in choice uncirculated condition will inspire the domestic French market to be more discerning in their grading. This book is an open challenge to French numismatists for them to examine modern (say, coins of Napoleon to date) coins with American eyes.

For years, many American collectors of French coins have baffled French dealers with their seemingly arbitrary grading whims. The reason for this lies not with any fault in the French, but rather with numismatics in the United States. Very few American coins are of real absolute rarity. The vast American collector market focuses, therefore, on quality. The large number of American coins minted permits Americans collectors to be very selective: they are very demanding when it comes to grade of preservation. To call a coin “nice uncirculated” isn’t enough. The American collector wants to know: not just how nice, but exactly how nice. This has led to the numerical mint state grading system which has caused so much confusion in other countries. Many French coins are so rare in high grade that not enough of them have been on the market for there to be a set price structure. A coin described as “SUP à FDC” could well be the finest anyone has seen in years of a given issue, and therefore no one in France asks if it would be the equivalent of an American AU-58 or an American MS-65. The fact is, however, that it does matter.
The world is getting smaller, and contact among numismatists of all countries will only increase. French coins are enormously popular in the United States and Japan, as well as to a lesser degree in Germany and Switzerland. The huge price swings in American coins, depending on their grade, is practically universally known. These price swings do not yet exist in the domestic market for French coins. It is only a question of time before this situation changes.

The market in the United States has already adapted its own standards to its pricing for high quality French coins. Small increases in the quality of an uncirculated coin can mean a large increase in that coin’s price. French dealers will note this and take advantage of it, if only for purely economic reasons. French collectors will soon do likewise, or else watch their best coins go into collections in other countries. This book, by French numismatists familiar with American coins and the American coin market, is an attempt to bring the future of French numismatics a little closer. Its intention is to put the domestic French market on an equal footing with its American counterpart and show, to quote Marvin Gaye, “what’s goin’on.”

It has long been taken for granted that price guides and reference books on coins, while useful to the hobbyist, were usually quite dry in both content and appearance. Lacking color, design aesthetics or useful advice to the novice, they were purely functional vehicles, providing the pricing or identification information in a straightforward though bland format.
The 21st century is the Internet Age, and whether the use of color, attractive design or eye appeal has become more important may be a matter of debate, it cannot be argued that the new Le Franc Poche edition is a stunning and innovative new approach to a coin reference book.
The pricing section makes use of large, full color photographs of superb quality for each type, along with all vital statistics (in both French and English) such as size, weight, purity, edge and total mintage for the type. Beneath that, are grading guidelines in six grades, again, in both French and English. Pricing information follows, in six grades, for each date and mint. Bold prices in red indicate values for coins shown in “The Ideal Collection”, an online collection maintained by CGB of the finest specimens of each issue they have identified to date. Pricing column headings are color coordinated to match the grading descriptions shown above, adding not only visual attractiveness but clarity as well.
CGB has long been at the forefront in adopting the numeric Sheldon Grading System for French coins. While not perfect, it does add significantly greater structure to grading than the preceding system. Additionally, over the past thirty years, third-party grading services have leveled the playing field and provided increased transparency to the numismatic market.
After the standard listings for Copper, Silver and Gold issues, the book continues with the various Mint and Proof sets (Fleurs de Coins, Belle Épreuve et BU) issued by the Paris Mint from 1964 through the final issue in 2001. Sharp, clear, color photos assist collectors in identifying which particular set they have.
If the book contained only identification and pricing information, it would be extremely useful. But the staff of CGB has long been committed to both educating the collecting public as well as “spreading the gospel” of numismatics to a new, and hopefully younger generation of collectors. To that end, Le Franc Poche contains a plethora of introductory and educational material including a brief history of French coinage, a complete review of the Privy Marks used by both the General Engravers and the Mint Directors, an illustrated glossary, tips and advice on collecting French coins and finally guidelines on how to take further steps in your quest for more numismatic knowledge.
It is both encouraging and refreshing to see a numismatic firm take such a far-sighted and effective step towards explaining and expanding the coin-collecting hobby. Far too many dealers simply buy and sell, paying little heed towards the education of the collector or the future of the hobby. CGB has taken a major step towards encouraging new collectors as well as invigorating existing ones.
Whether you’re a novice, an intermediate collector or even an advanced numismatist needing a quick and handy reference, you’ll find Le Franc Poche excels in every aspect of a useful guide and fulfills its stated purpose admirably.

cgb.fr uses cookies to guarantee a better user experience and to carry out statistics of visits.
To remove the banner, you must accept or refuse their use by clicking on the corresponding buttons.

x
Would you like to visit our site in English? https://www.cgbfr.com